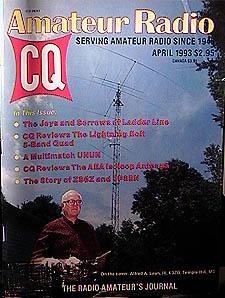 Congratulations to PVRC Member Fred Laun K3ZO. He is the April 1993 Cover Story on CQ Magazine.

Directly from CQ Magazine it says:

Fred Laun, K3ZO at his Temple Hill, Maryland QTH with a bit of aluminum sprouting in the background. Anyone who has spent more than a few years in the DXing end of the Amateur Radio hobby will recognize Fred as a noted DXer in his own right, and provider of countless DX contacts from rare and exotic settings.