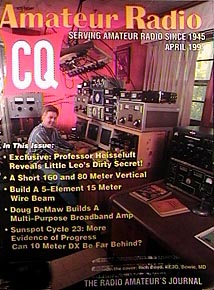 Congratulations to PVRC President Rich Boyd KE3Q. He is the April Cover Story on CQ Magazine.

Directly from CQ Magazine it says:

Now why do I get the feeling that this is the way Amy Boyd, N3MIL, wife of Rich Boyd, KE3Q, would like the station to look all the time? The truth is that it's been gussied up just a bit for the arrival of CQ Staff Photographer Larry Mulvehill. The Bowie, Maryland QTH is about 30 minutes due east of the White House, and sports a pretty enviable antenna farm currently consisting of a 160 ft. tower with 6 el. on 10, and 2 el. on 40, and a 120 footer with 6 el. on 20 and 8 el. on 15. Eighty and 160 are covered by inverted vees, one off each tower. Two 200 ft. towers are on the way up for stacked 3 el. 40's and a high 20 Yagi. Now the really enviable part is that Rich has about 7,000 ft. more tower on the property waiting for the right application! Ask him about it some day. The station is a mix of Yaesu, Kenwood, and Drake transceivers, and in addition to the pair of Alpha 77's has six monoband amps, five of which sport 4-1000A's and were homebrewed by N2FB, the sixth being a converted Henry industrial sputtering amplifier. The classic gear consists of an early Collins 74A-4, and a Hallicrafters SX-101, HT-32, HT-33 setup, all ready for use on those cold, snowy evenings when you could use a little extra heat in the shack. Rich is President of the famed Potomac Valley Radio Club, is a self-employed professional journalist, and has held a Ham ticket for the last 32 years.

A note from the webmaster: I want to build a page with other PVRC folks who have made the cover. Please email me with the calls, months, and year of the Covers. Thanks... Steve